Raspberry Pi’s make a good server for deploying backend API’s, hosting websites etc. But what happens when for any of the numerous reasons it fails. Being left without a backend is a highly unfavorable scenario.

To mitigate this a high availability cluster server is employed. Basically what this means is that we put multiple Raspberry Pi’s hosting the same backend and make them share a single virtual IP address so that the end user can open a single address without the hassle of going through multiple IP’s and be served with the webpage or the API every time. If one of the Raspberry Pi’s goes down the virtual IP will be grabbed by the next Raspberry Pi and operations will continue unhindered.

But how to make the Raspberry Pi’s share a virtual IP you ask? Keepalived. Keepalived is a routing software written in C. The main goal of this project is to provide simple and robust facilities for load balancing and high-availability to Linux system and Linux based infrastructures.

For testing keepalived, we shall be using nginx which basically helps in hosting a website on the pi to test the virtual IP. We shall be using 2 R-Pi’s for this but you can use more than that too.

This step is fairly simple, just type the following command into the terminal on both the raspberry pi’s

And that should handle the entire installation process (one thing which makes linux my favourite OS).

There should be a file named index.html, open it using your favourite text editor, for me that would be nano. Put the following into it. Be sure to open it with root privileges otherwise you will not be able to save the file.

And then save it, for nano that would be ctrl + o and then press enter to save it and ctrl + x to close the nano editor. Make similar changes to the rest of the R-Pi’s substituting 1 with 2, 3 and so on. Once nginx is configured you can open a web browser and type in the IP of the Raspberry Pi to check if nginx is working properly.

Once nginx is up and running we can head over to keepalived.

And that takes care of the keepalived installation (isn’t linux just awesome).

Type the following command to open the keepalived configuration file

This file might not exist the first time you open it. Also feel free to replace nano with your favourite editor such as gedit or vim, but make sure you open it with root privileges otherwise linux won’t let you save it.

Enter the following into the keepalived.conf file on the R-Pi with the maximum priority

On the other R-Pi add the following configuration

The virtual router-id and virtual IP address need to be the same on all the nodes. Now restart the service on all the R-Pi’s using the following command

To see if the Raspberry Pi captured the IP type

It should show something similar to what is shown below 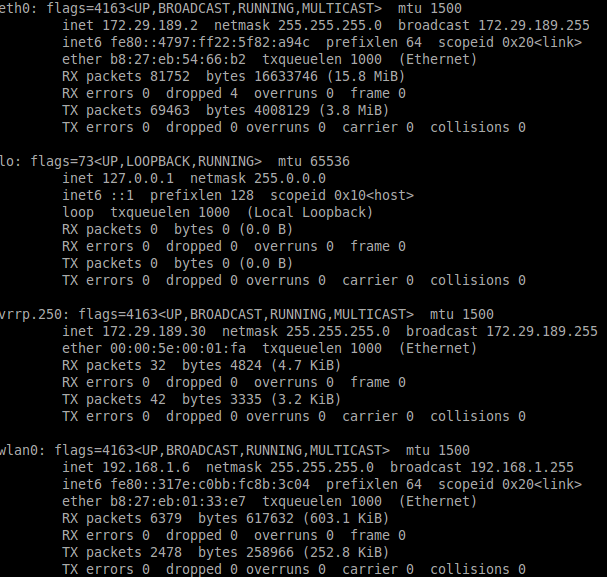 Here you can see that there is another interface called vrrp.250. This is generated due to the line use_vmac and 250 is the virtual router-id. Advert int is basically how many seconds between each health check broadcast.

To test if the system is working, type the following command on the Raspberry Pi with the highest priority

And then IP should pass onto the next Raspberry Pi’s and so on.