What is BLDC Motor? Construction & Working

BLDC motor is betterly known as an electronically commutated motor. They are similar but more reliable than DC motors. Read the blog to know how BLDC motors differ from DC motors. Also, acknowledge the working and usage of motors in our nearby applications.

BLDC motors are very popular in a wide array of applications. Compared to a DC motor, the BLDC motor uses an electric commutation, replacing the mechanical commutator and making it more reliable than the DC motor. In BLDC motors, rotor magnets generate the rotor’s magnetic flux, allowing BLDC motors to achieve higher efficiency. Therefore, BLDC motors may be used in high-end white goods such as refrigerators, washing machines, dishwashers, etc., high-end pumps, fans, and other appliances that require high reliability and efficiency.

A BLDC motor is a revolving electric machine with surface-mounted permanent magnets on the stator and a traditional three-phase winding with focused coils on the rotor. Figure 2 shows the situation. 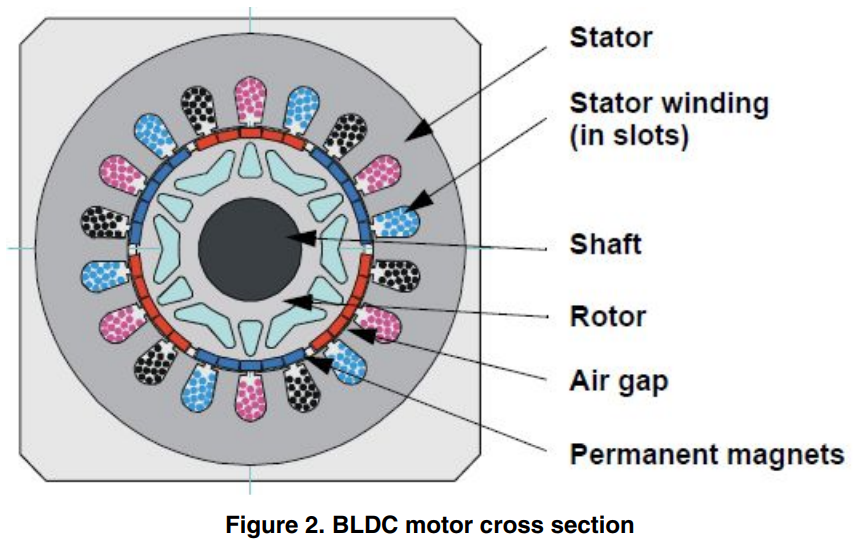 Unlike brushless DC motors, polarity reversal is accomplished using power transistors that switch in time with the rotor position. To sense the actual rotor position, BLDC motors always include external position sensors known as Hall sensors, or the position can be determined without sensors using the BEMF zero cross detection method.

DIGITAL CONTROL OF A BLDC MOTOR:

The BLDC motor is pushed through square voltage strokes coupled with the given rotor position, as depicted in Figure 3. The stator flux and the rotor flux, generated by a rotor magnet defines the torque and thus, the velocity of the motor.

The voltage strokes should be applied to 2 phases of the three-segment winding machine primarily based totally at the rotor position, so that the angle between the stator flux and the rotor flux is close to 90°, to get the highest possible torque. Therefore, the motor calls for digital manipulation for efficient operation. 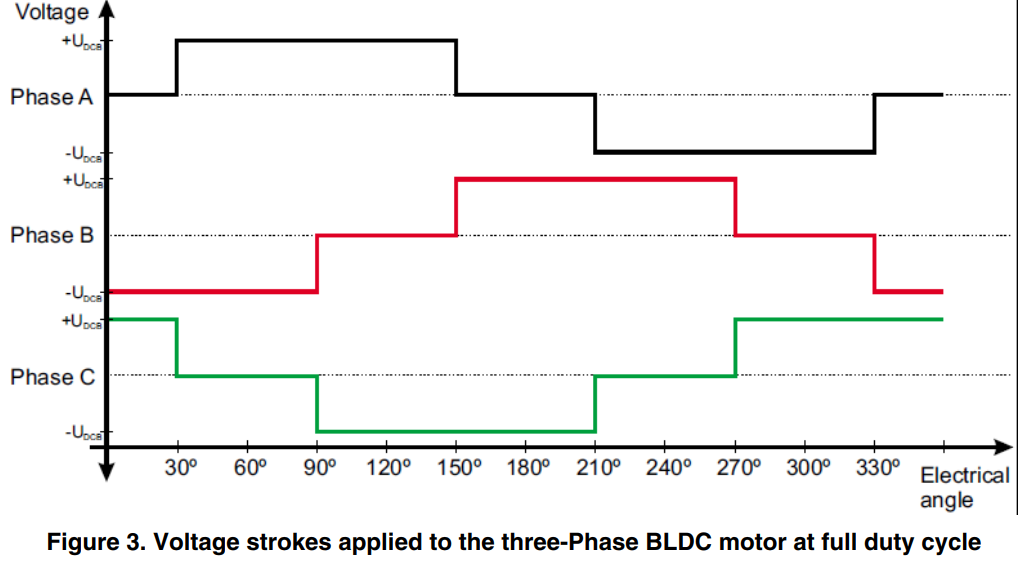 In a three-phase BLDC motor, a preferred three-phase power storage is used. See Figure 4. The strength level makes use of six power transistors that function both in an unbiased or complementary mode.

In both modes, the three-section power stage utilizes two phases to run the motor. The third phase isn’t powered and left behind. Thus, six different voltage vectors can be implemented to the BLDC motor using the pulse-width modulation (PWM) technique.

There are simple varieties of power transistor switching schemes: unbiased and complementary. Both the switching modes are capable of working in bipolar or unipolar mode. The current application makes use of the unipolar complementary / unbiased combine PWM mode. 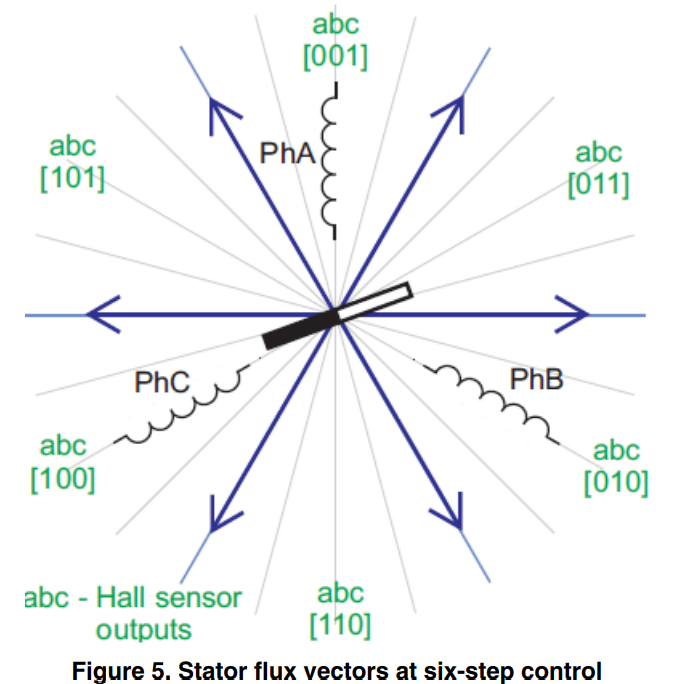 When the rotor arrives at a specific position, the Hall sensor state changes its values from ABC[110] to ABC[100]. See Figure 7 another voltage design is chosen and applied to the BLDC engine.

As displayed in Figure 6 and Figure 7, it is hard to keep the point between the rotor transition and the stator motion definitely at 90° in a six-venture control strategy, while utilizing the six-venture control procedure. The real point differs from 60° to 120°.

The substitution interaction is rehashed per every 60 electrical degrees and is basic to change the exchanging design as quick as conceivable after a Hall sensor edge is recognized. Any deviation causes force swells, bringing about speed variety. 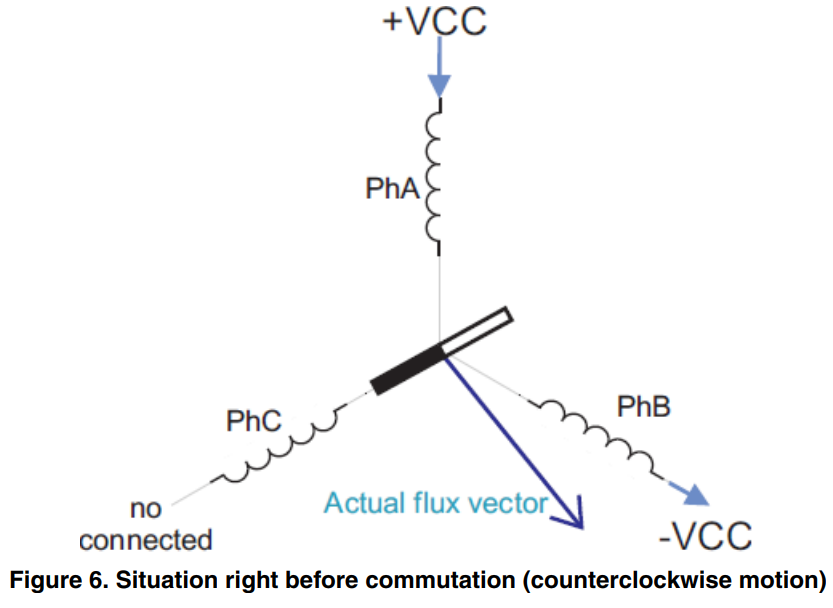 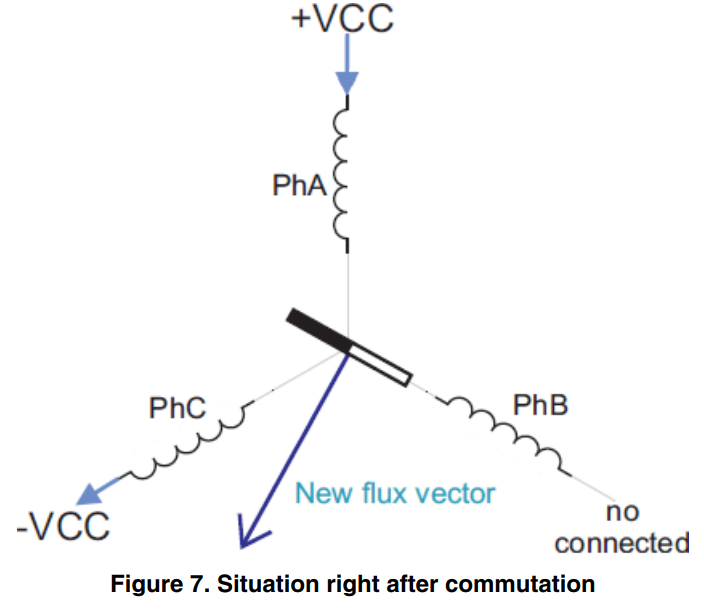 COMMUTATION TABLE FOR HALL SENSORS PLACED AT 60 AND 120 DEG 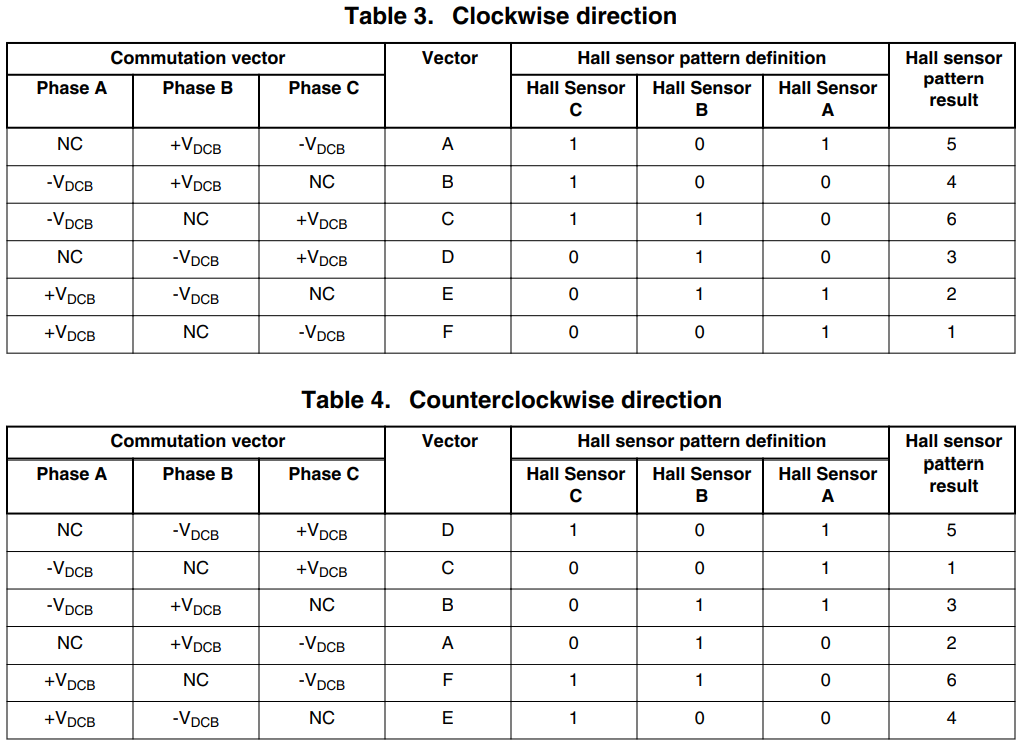 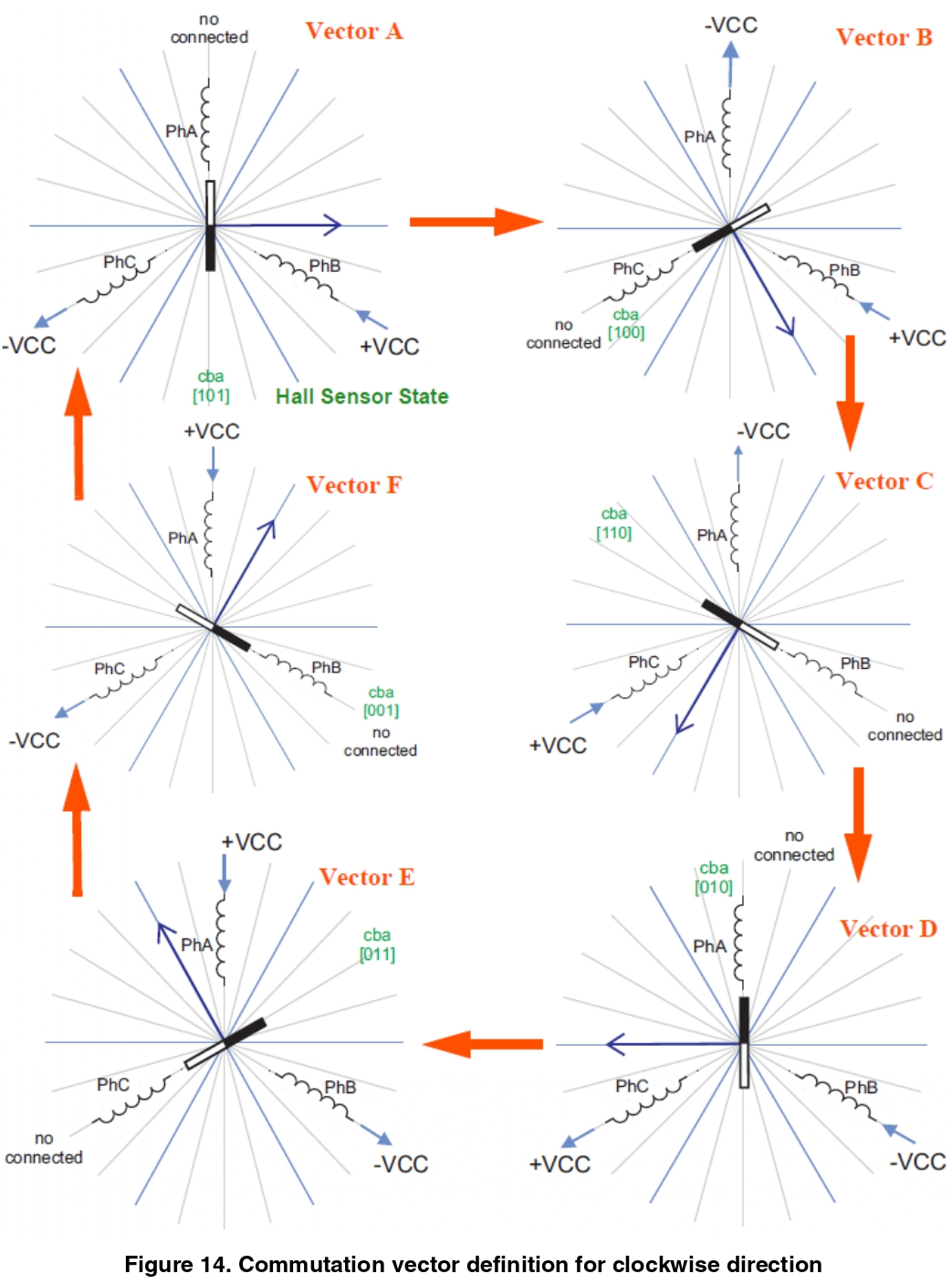 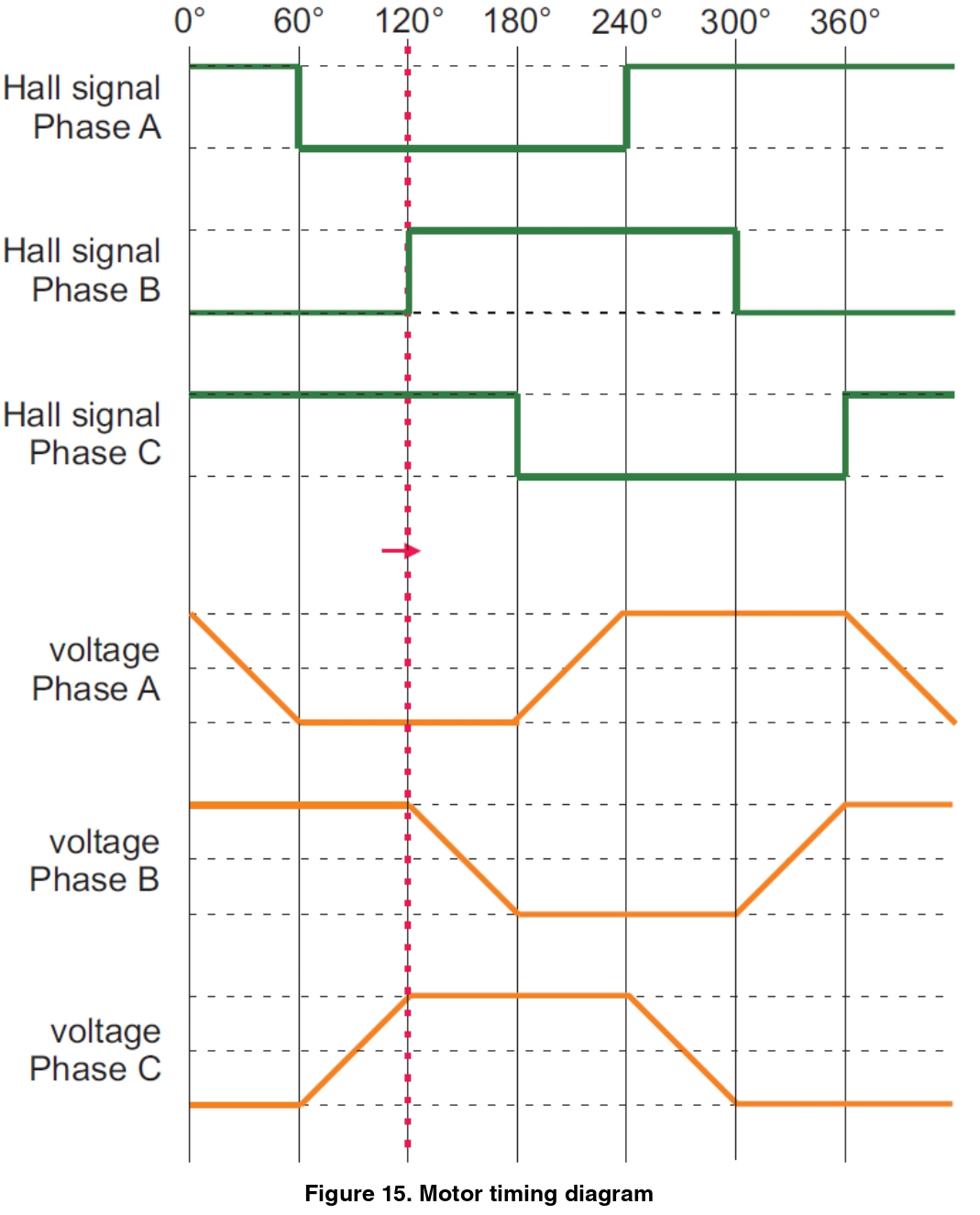 This blog has been submitted by KRSSG under the Robocraze club outreach program.