An Introduction to Process Control Schemes

Before starting with process control schemes, let us understand what is the process?

What is meant by Process.

Now we are aware of what process means, let us now understand process control.

It is the term that refers to different ways and methods of controlling a process.

Now, what exactly is meant by controlling a process? Controlling a process means keeping a check on the product’s quality, ensuring that proportions of different components used to make the final product are in the right amount, to provide the safety measures while manufacturing.

A Process Variable or (PV) can be any physical quantity measured by a sensor or any other instrument. This variable’s output is sent to the controller that performs the required actions based on this. In short, a PV is a variable whose output needs to be kept constant.

Manipulated Variable or (MV) is also a physical quantity that the controller manipulates to keep the output of PV (Process variable) a constant value defined by the set point.

It is defined as a constant value at which process variable is to be maintained.

It is the difference between the output of the process/ measured variable and the setpoint. The error can be positive or negative. The primary function of any control scheme is to eliminate or minimize error as much as it can.

In the above figure, when input is given to the system, it will produce an output, the output produced by the system will then be compared with the system’s setpoint. Suppose there is a negative or positive difference between the setpoint and the output(some process variable). In that case, the error detector will then send a signal to the controller to perform the required actions to maintain a given set point.

Let us understand this with an example.

Consider a tank where you have to keep the pressure of the tank at a constant value. 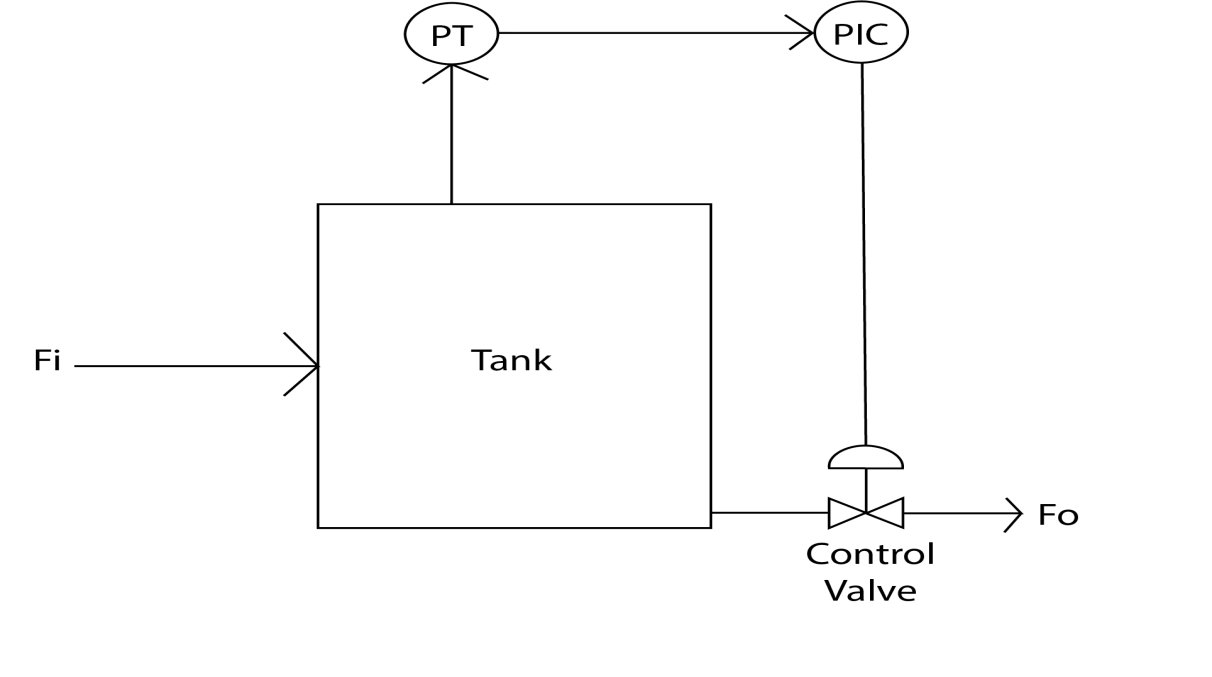 Process variable - Pressure in the tank

Manipulated variable - flow of the liquid through the tank.

To maintain constant pressure inside the tank, an assembly of pressure transmitter and pressure controller is installed.

When liquid passes through the tank, its pressure is measured and transmitted to the pressure controller by a pressure transmitter. The controller then decides the necessary action by determining the difference between the actual measured pressure and the setpoint pressure that is to be achieved. The control valve will then act in response to the controller’s signal and alter the liquid’s flow to maintain pressure inside the tank.

The feedforward control system is an open-loop control system used to prevent errors from entering and affecting the process system. Unlike feedback control, it does not change the input based on errors. It varies the input variables in the system by measuring disturbances and predicting their effects on the controlled variable. Hence it is also called a Predictive control system.

When the process starts, the input signal is passed to some external load. A sensor measures disturbances and the information is sent to the controller. Accordingly, the Feedforward controller varies the input variables, thereby making the corrections before the error causes some change in the output. The stability of the system is unaffected by this.

Consider a heat exchanger process where you are required to keep the temperature at a constant value.

Process Variable - the temperature of a heat exchanger.

Manipulated Variable - Flow of the steam. 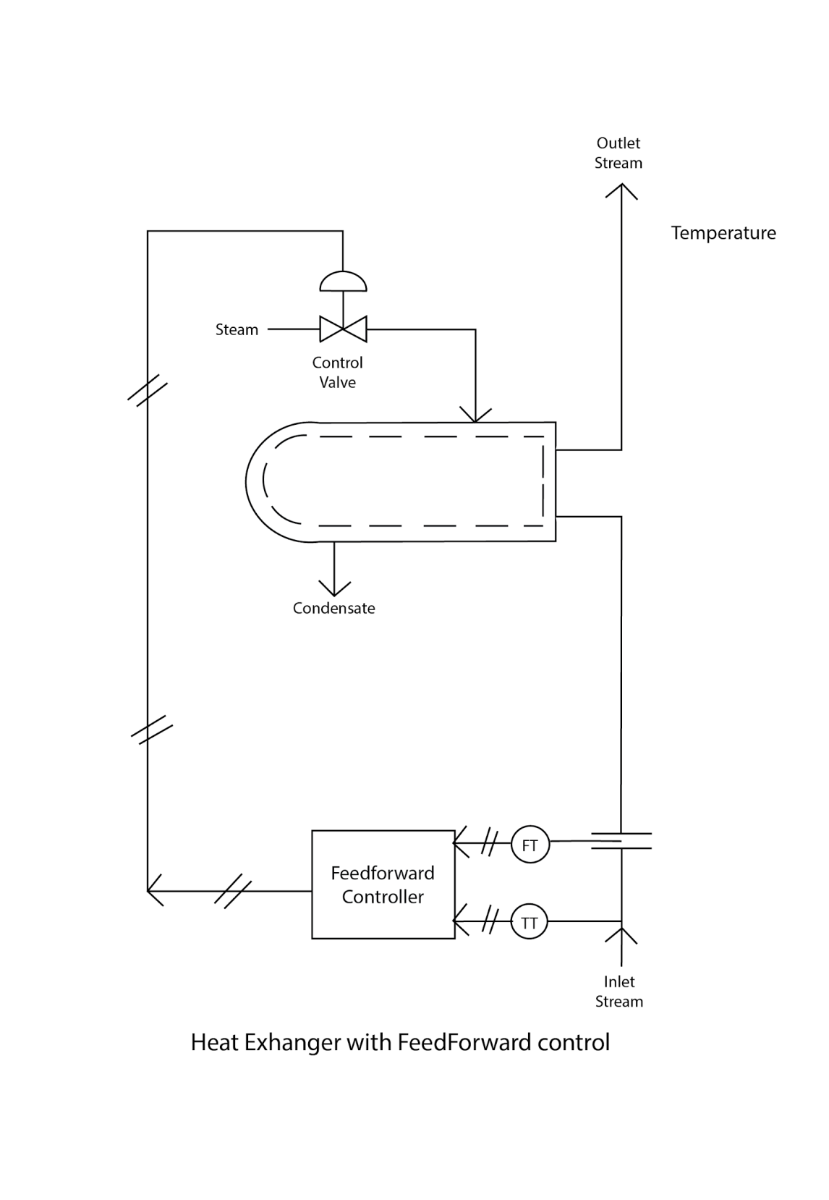 Not all disturbances are measured in a feedforward control system; hence for better performance, a feedback system should be used in conjunction with it as feedforward will handle the effects of disturbances while the feedback will take care of the unmeasured disturbances and errors in the system.

Some more examples of feedback, feedforward, and feedforward in conjunction with feedback are shown in the images below.

The above figure is an example of the feedback control system of a flush tank. The float over here is used for the level measurement of the liquid. The float is connected to the control valve via a string. The valve’s open and closed action depends on the float’s height from the tank’s bottom. A flow stopper is connected at the end of the string on the side of the valve. When the float is near the bottom of the tank flow stopper is opened, and water flows into the tank, and when the float is away from the bottom of the tank, the flow stopper is closed & water stops flowing into the tank. 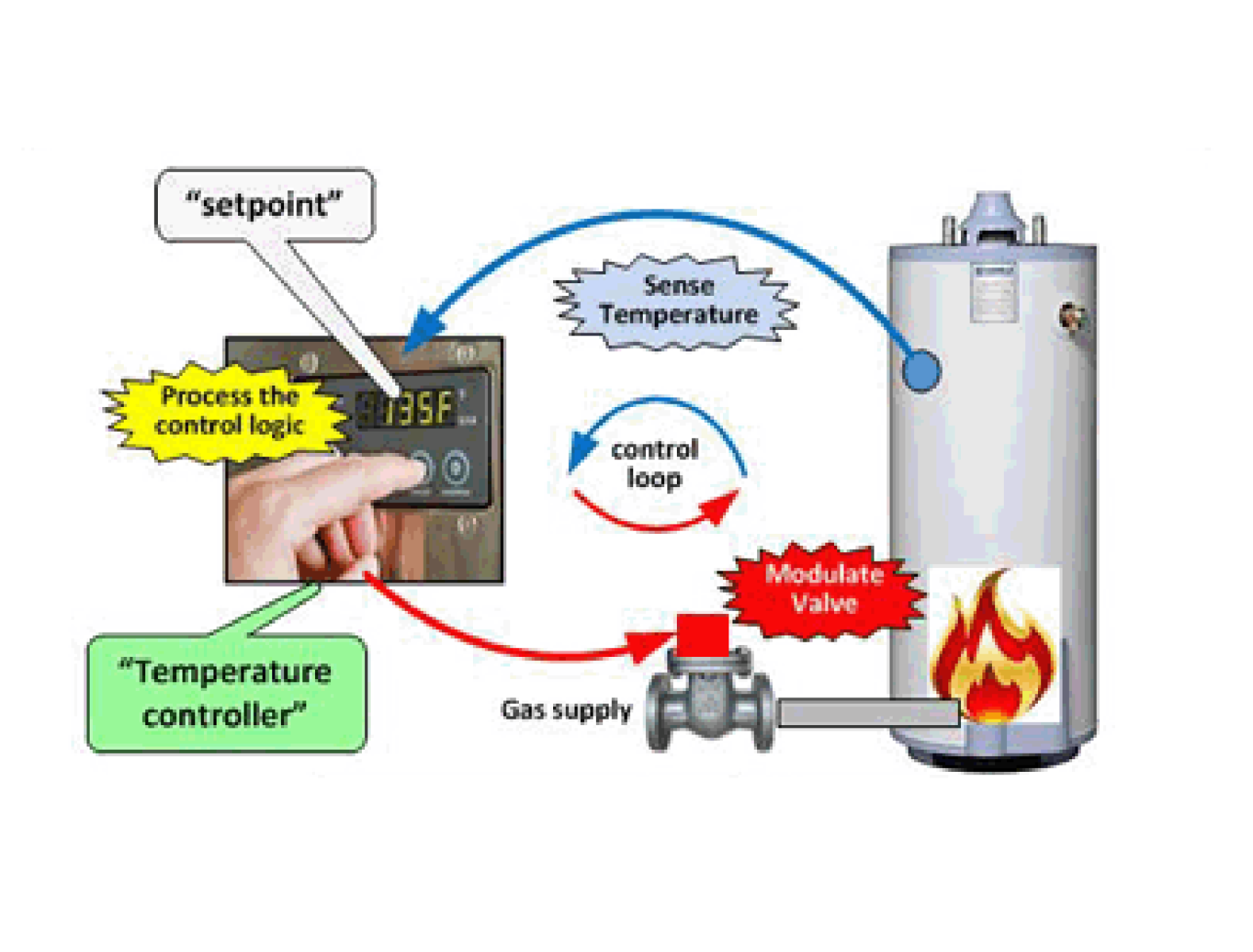 The below image represents a feedforward control system. The example shown in the picture is a pretty general example that will indicate how the fluid’s pH inside the tank will be controlled to a particular level of acidity or alkalinity depending upon the process it will be used for. Over here, when fluid 1 enters, its pH level is measured by the pH meter. It is then transferred to the pH controller. The pH controller will then compensate for the level of acidity or alkalinity by controlling the flow of fluid 2 by comparing the difference between readings from the pH meter and set point. 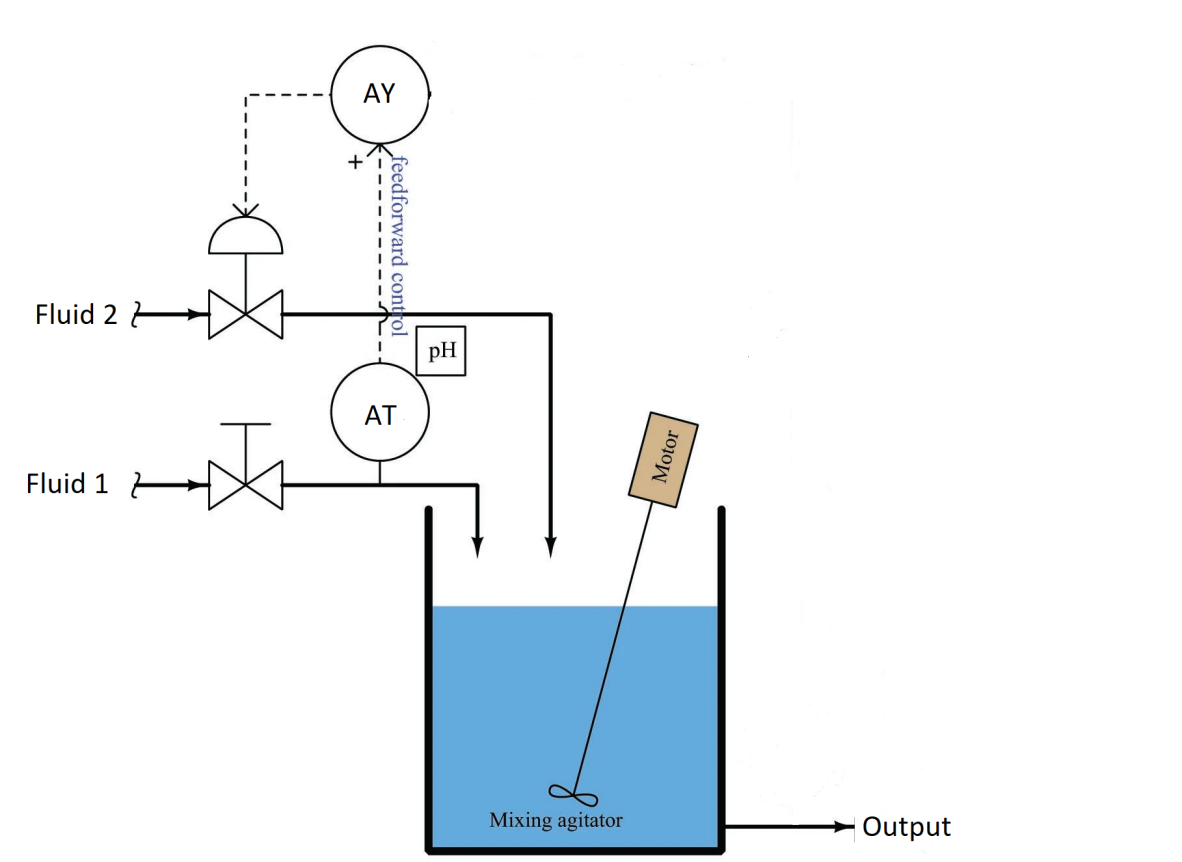 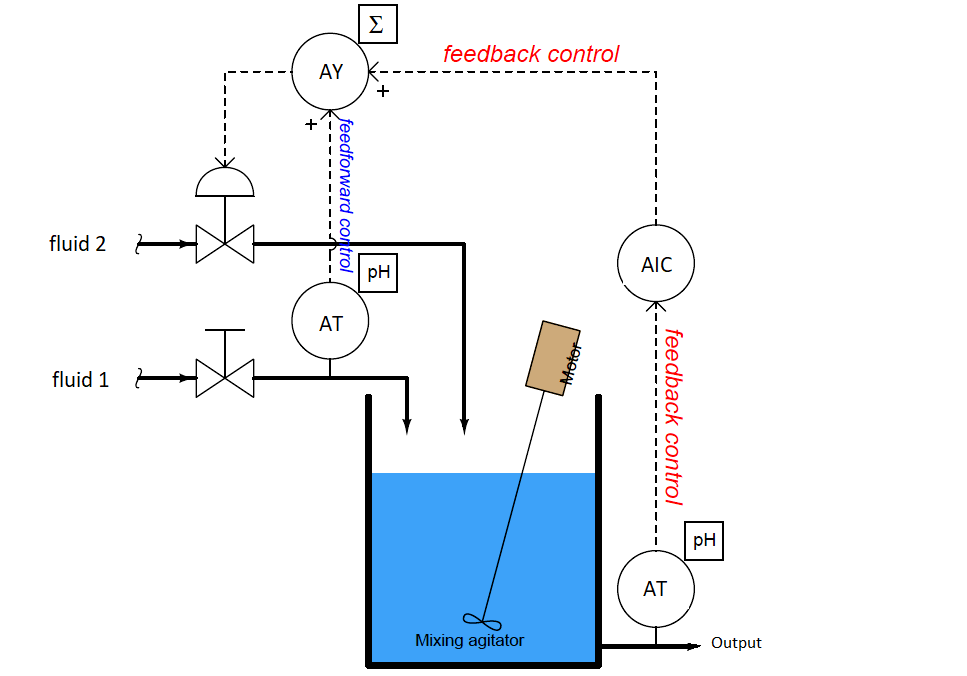