Introduction to “Internet” of Things

At any point in time, have you ever wondered how communication takes place over the internet?

Well, in order to achieve connectivity from end-to-end, we need to specify a few ways in which data should be divided into packets, addressed so that it can be sent to the correct location, transmitted, routed and received. For this, the IP Suite or the Internet Protocol Suite is implemented. It is the standard network model and communication protocol stack used on the majority of computer networks and even on the Internet. In the IP Suite, various protocols are used to define the end-to-end handling methods of the data for everything, ranging from packetizing, addressing, routing to receiving.

We need to achieve end-to-end connectivity by specifying how data should be packetized, addressed, transmitted, routed and received, for this, we use an internet protocol suite. Internet Protocol suite also known as IP suite is the standard network model and communication protocol stack used on the Internet and on most other computer networks. In the suite the protocols define end-to-end data handling methods for everything from packetizing, addressing and routing to receiving.

The foundational protocols of the IP Suite are composed of a set of communication protocols, the TCP or Transmission Control Protocol and IP or Internet Protocol. Because of this, the IP Suite is also generally referred to as TCP/IP, kind of like a nickname. Together in the form of IP suite, they provide the necessary information required for end-to-end data communication, i.e. they specify how any data should be packetized, addressed, transmitted, routed, and received. This whole operation or functionality is broadly divided into four different layers of abstraction, that based on the scope of networking involved, classify all the related protocols.

The IP Suite is a set of communications protocols used in the Internet and similar computer networks. It is generally referred to as TCP / IP because the principal protocols in the suite are the TCP aka. Transmission Control Protocol and the IP aka. Internet Protocol. The IP suite provides end-to-end data communication specifying how data should be packetized, addressed, transmitted, routed, and received. This functionality is organized into four abstraction layers, which classify all related protocols according to the scope of networking involved. 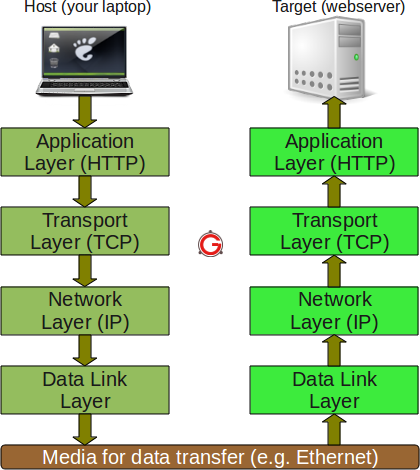 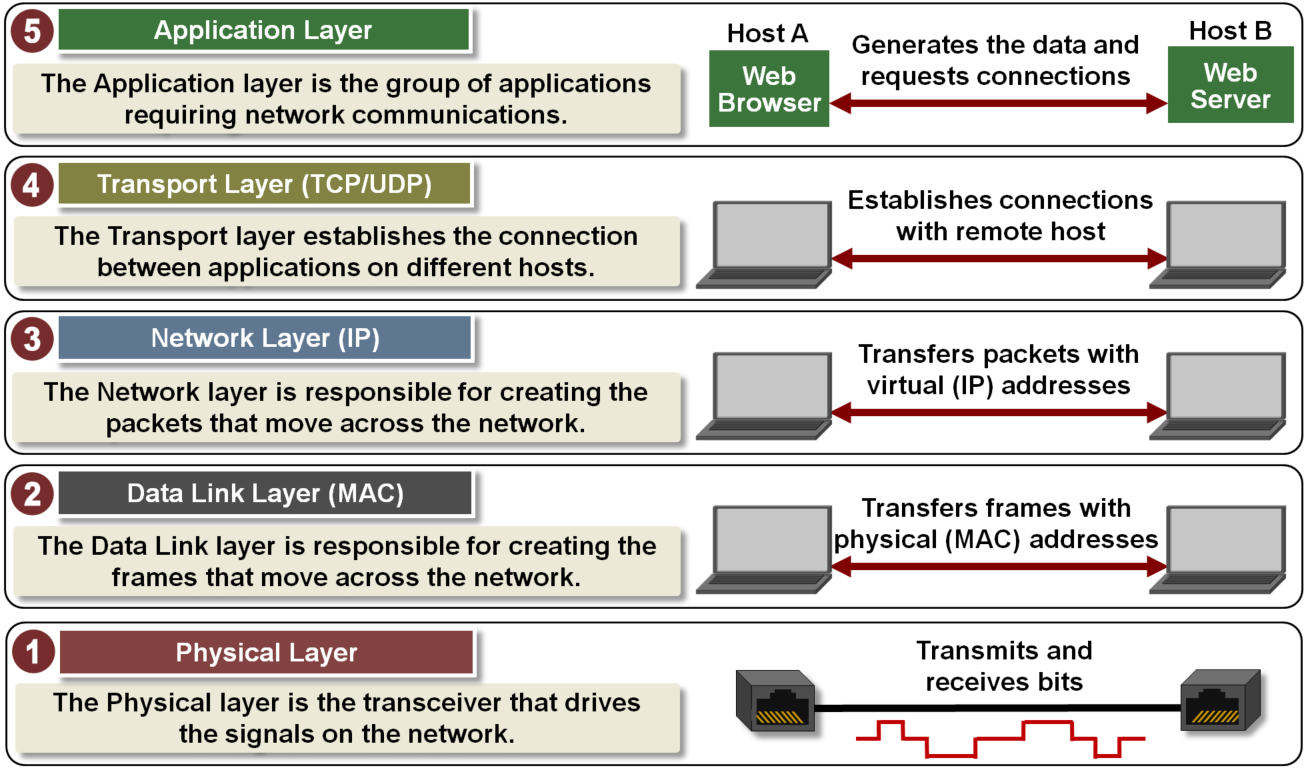 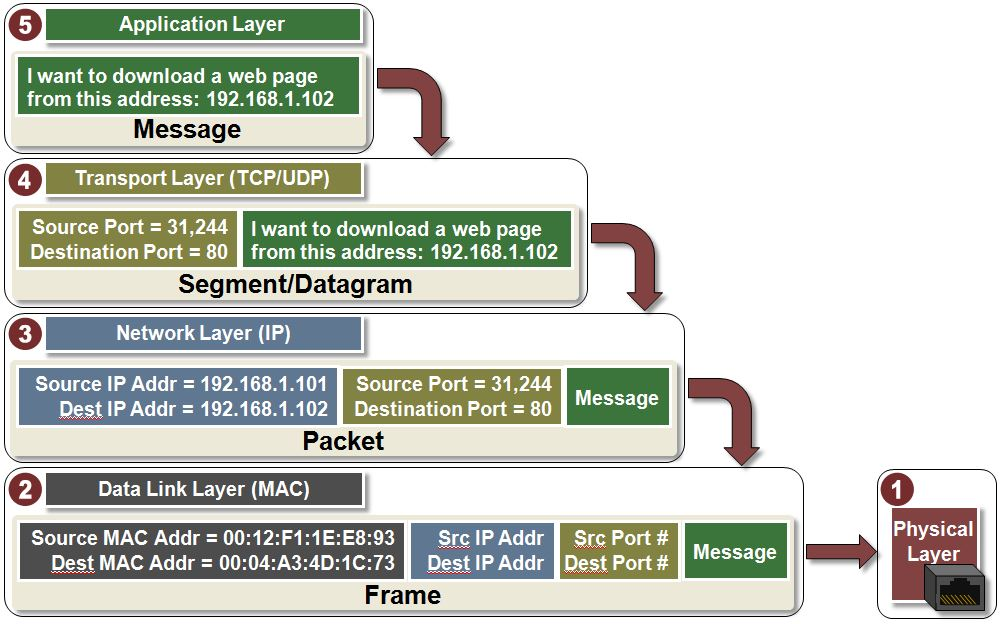 Whenever a user generates a command that uses a TCP/IP application layer protocol, a chain of events take place after that. The user's command or message passes through the TCP/IP protocol stack on the local machine and then across the network media to the protocols on the recipient. Different protocols add a piece of new information to the original data at each layer of the sending host.

The protocols at each layer on the sending host add information to the original data.

In the TCP /IP model, the Link layer consists of the physical layer and the data link layer.

The Physical layer encodes and decodes the bits in binary form and includes the transceiver that drives and receives the signals on the network.

Data Link layer- At this layer, frames are created that use MAC addresses to identify the source and the destination.

The Network layer creates packets that use IP addresses to identify the packet’s source and destination. An IP address can be represented using IPv4 or IPv6 address format.

The Transport layer is used to establish the link between the applications running on different hosts. For reliable connections, it uses TCP, and for a connectionless and faster communication, it uses UDP. To keep track of the processes running in the applications above it, it assigns port numbers to different processes and uses the Network layer to access the TCP/IP network.

The Application layer generates a message, which is then sent to the Transport Layer. In this case, the specific application is a web browser requesting a webpage download.

Four layers are as follows:

IPv4: A 32-bit IPv4 address comprises two parts: the network prefix and the host number. All hosts within a single network have the same network address. Each host has its own address, which is used to identify it. The address depending on the networks’ scope and the type of device, is either globally or locally specific. Locally specific IP addresses are needed for devices that are only available within the network. The Internet Assigned Numbers Authority (IANA), a central numbering authority, assigns IP addresses. IANA makes sure the addresses are internationally specific where they're required, and it has a vast address space set aside for devices that aren't available outside of their own networks.

Class A addresses use only the first byte (octet) to specify the network prefix, leaving 3 bytes to define individual host numbers.

Class B addresses use the first 2 bytes to specify the network prefix, leaving 2 bytes to define host addresses.

Class C addresses use the first 3 bytes to specify the network prefix, leaving only the last byte to identify hosts.

Curious to know why the address notation is so weird?

Dotted decimal notation is used to express 32-bit IPv4 addresses, in which each byte (or octet) is treated as a separate integer. The rightmost bit in an octet represents 20 (or 1), increasing to the left until the octet's first bit is 27. (or 128). The IP addresses in binary format and their dotted decimal equivalents are listed below.

What exactly is IPv6, and how does it differ from IPv4?

The continued expansion of the Internet and the need to provide IP addresses to satisfy it serve growing numbers of additional users, computer networks, Internet-enabled computers, and new and advanced collaboration and networking applications have accelerated the adoption of a new IP protocol.

IPv6 was created with robust architecture to meet the current and expected future demands. Today, IP version 4 (IPv4) is commonly used by the Internet, intranets, and private networks worldwide. In the following areas, IPv6 improves on IPv4's capabilities and structure:

Instead of 32 bits, IPv6 addresses have 128 bits and a scope field that specifies the application that may use the address.  IPv6 does not support broadcast addresses; instead, it uses multicast addresses.  In addition, IPv6 introduces a new address class known as anycast.

What is an internet protocol?

The Internet Protocol (IP) is a compilation of rules for routing and addressing data packets so that these packets can travel across networks and reach their intended destination. Data travelling over the Internet is broken down into smaller units known as packets. Each packet has a piece of IP information attached to it, which lets routers transfer packets to the correct location. Any device or domain that links to the Internet is given an IP address, and data is sent where it is required through packets directed to the IP address assigned to them. Once the packets arrive at their destination, the transmission protocol is used in combination with the Internet Protocol to handle them. TCP and UDP are the most widely used transport protocols.

The transport layer establishes primary data channels that applications use for task-specific data exchange. The layer establishes host-to-host communication through end-to-end message transfer services independent of the underlying network, the structure of user data, and the logistics of exchanging data. The layer defines the concept of the network port to provide process-specific transmission channels for applications.

Now let’s dive into what a network port is!

A 16-bit unsigned integer called the port number is used to identify a port for each transport protocol and address combination. The Transmission Control Protocol is the most popular transport protocol that uses port numbers (TCP). A network port is a connection point between any two devices (computers) that uses transport layer protocols such as TCP that is Transmission Control Protocol, and UDP that is User Data Protocol.