Implementation of ADC in AVR

Welcome readers, in this blog, we will learn ADC and how to implement it.

Let’s start with the first word, What exactly is AVR?

First of all, AVR is a family of microcontrollers developed by Atmel corporation beginning in 1996. The original meaning of “AVR” letters is not defined officially yet, sometimes Atmel says it means nothing in particular, and sometimes Atmel has said it means "AdVanced Risc" or "Advanced Virtual Risc", but if you dig deeper:

The AVR is basically a modified Harvard architecture machine, where programs and data are stored in separate physical memory systems (i.e they appear in different address spaces) but it has the ability to read data items from program memory using special instructions.

In the AVR family, it has a lot of members based on their program memory, pin packages and other features.  tinyAVR/ATTiny series, megaAVR/ATmega series, XMEGA, FPSLIC and many more. Flash, EEPROM, and SRAM are all integrated into one single chip, that’s why you don't need external memory in most applications. Some devices have a parallel external bus option to allow adding additional data memory or memory-mapped devices. Now the second one ADC basically means Analog to digital conversion. In electronics, an analogue-to-digital converter (ADC, A/D, or A-to-D) is a system that converts an analogue signal, such as a sound picked up by a microphone or light entering a digital camera, into a digital signal. An ADC is used in electronic devices that convert an input analogue voltage or current to a digital number that represents the magnitude of the voltage or current. An ADC converts a continuous-time and continuous-amplitude analogue signal to a discrete-time and discrete-amplitude digital signal. The conversion involves quantization of the input, as a result, it introduces a small amount of error or noise. Moreover, instead of continuously performing the conversion, an ADC does the conversion periodically, sampling the input, limiting the allowable bandwidth of the input signal. Now as you got some basic idea of ADC you have to be aware of some terms before we reach the coding part.

An analogue signal is continuous and it is necessary to convert this to a flow of digital values. It is therefore required to define the rate at which new digital values are sampled from the analogue signal. The rate at which new values are created from that analog continuous signal is called the SAMPLING RATE of the ADC. The converted digital signal can also be altered to its initial analogue form by using DAC(Digital to Analog Converter)

The resolution of the converter indicates the number of different(i.e discrete)values it can produce over the allowed range of analogue input values. Let me take you through an example-

IMPLEMENTATION OF ADC IN AVR(ATMEGA328P)

Now that you are familiar with the basic terms used in ADC, now it’s time that we look at how to implement ADC.

First, let's clear our basics about registers needed for the implementation of ADC.

In order to convert an analogue voltage to a digital value on any ADC, the converter has to be provided with a range of voltages. The lower limit is always GND on the Arduino (i.e. 0V) but you can select one of three sources to serve as the high reference:

We will learn about the ADLAR bit in a while, so continue reading

The next register we are gonna talk about is the ADCSRA-ADC Control and Status Register A(we have another register ADCSRB but for basics of ADC, it's not needed):-

Bit 7 - The ADEN bit enables the ADC . so it must be set to 1 for doing any ADC operation.

Bits 2:0(meaning 2 to 0) - The ADPS2, ADPS1 and ADPS0 bits select the pre-scaler divisor value. Those available are:

The ADC circuitry needs to have a clock signal provided to it in the range of 50kHz to 200kHz. The ATmega328P clock is too fast (16MHz on the Uno) so the chip includes an adjustable pre-scaler to divide the processor clock down to something usable. The processor clock speed is divided by the prescaler value to give an ADC clock speed. Using a lower pre-scaler will make the conversion faster but at the cost of accuracy(ex for resolution less than 10 bits).

Last but not the least, ADCL and ADCH – The ADC Data Registers 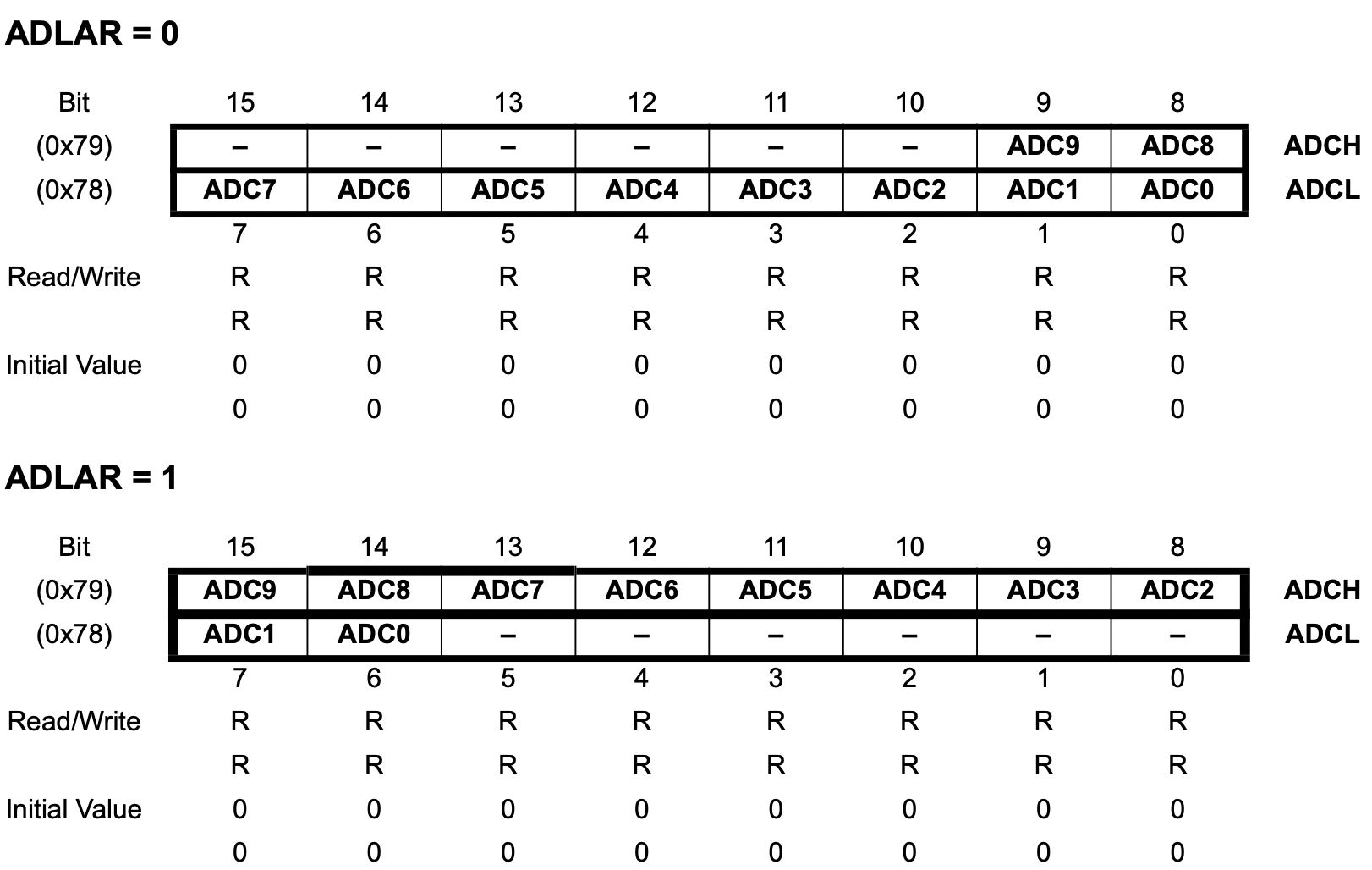 U remember right, where we left about that ADLAR bit in ADMUX.

If you want to use ADLAR=0, you have to read the ADCL register first and then ADCH left-shifted 8 times.

*When using the 10-bit results (ADLAR=0), the results can be read into your program with:

Note:- For any further information u can always refer to the datasheet of ATMEGA328P.

Now let's use the knowledge we gained from above and code a simple program where we read the analogue input and store it in a variable:-

Here if you print the value of “value” variable you will get any value from 0 to 1023 depending on the voltage at A0 pin to be 0 to 5 respectively.